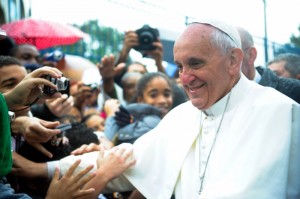 I am not a Catholic, but I was deeply touched and  slightly emotional when I viewed the various video images posted online about the Holy Father, Pope Francis touching and embracing children with Autism Spectrum Disorders.

On Saturday Nov. 22 the Vatican held its first autism conference entitled, “The Person with Autism Spectrum Disorders: Animating Hope,” Now having watched the various news stories and videos what instantly struck me was the emphasis on hope and the need to end stigma.

During the proceedings, the pontiff said:

“It is necessary the commitment of everyone, in order to promote encounters and solidarity, in a concrete action of support and renewed promotion of hope,”

Pope Francis spoke of the need to “break down the isolation and stigma that burden” those individuals that live with autism and I feel that this statement is an extremely positive one for the autism community. Many families and children do live with the stigma of autism. They are labelled in such a way by society that they are either seen as ‘naughty children‘; that the parents are not strict enough or are not parenting correctly; or that indeed these children will  not amount to anything in life.

It is also no surprise to hear that many people, even in this day and age,  believe that autism does not exist, I have had this said to me about my child. So, to have Pope Francis stand and talk about hope and the need to end such stigmas is hugely powerful for the entire autism community and I feel that we need to draw strength from this.

He also touched upon the issues of loneliness and that their needs to be an accessible network of support services available to families affected by autism, as well as governments needing to be responsible for such services.  He also added  that friends and the community can help these families in the many feelings that they have during the daily routines of caring for someone on the spectrum.

Pope Francis greeted the children and young children with autism, touching their heads, cupping their faces in his hands and kissing them on the cheek. It was very evident that many of the families and indeed children in attendance were moved emotionally by his presence and his kind gestures.

Maria Cristina Fiordi, who is a mother of a child with autism is reported in the Crux as saying:

“It was an explosion of emotions,

“For us, we are parents of a child affected with autism, this meeting was very important. It was as an outstretched hand through a problem that is very often not considered in the right way.”

7,000 people attended the event, including many health care professionals.

Everyone should be committed to promoting acceptance, encounter and solidarity through concrete support and by encouraging renewed hope.  In this way we can contribute to breaking down the isolation and, in many cases, the stigma burdening people with autism spectrum disorders, and just as often their families.

This must not be an anonymous or impersonal accompaniment, but one of listening to the profound needs that arise from the depths of a pathology which, all too often, struggles to be properly  diagnosed and accepted without shame or withdrawing into solitude, especially for families. It is a Cross.Assistance to people affected by autism spectrum disorders would benefit greatly from the creation of a network of support and services on the ground that are comprehensive and accessible.  These should involve, in addition to parents, grandparents, friends, therapists, educators and pastoral workers. These figures can help families overcome the feelings, that can sometimes arise, of inadequacy, uselessness and frustration.For this very reason, I thank the families, parish groups and various associations present here today and from whom we heard these moving and meaningful testimonies, for the work they carry out every day. I extend to all of them my personal gratitude and that of the whole Church.