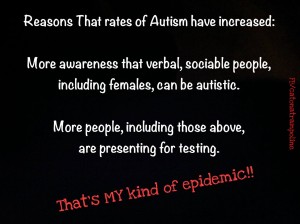 A quick word about the study – it has significant limitations.

The data was collected in 2010, four years ago, in only 11 locations across the USA. Only data from 8 year old children is included. In some of the 11 study locations, researchers could only access health service records, not educational ones.

The study gives no explanation of the prevalence increase. it provides no data on awareness levels amongst professionals and families, and no comparative data on the total number of children actually screened for autism in 2010 and 2008, and the percentage of these who actually received diagnosis. The main question raised by the study is this:

WHY were there more autistic children in 2010 than there were in 2008?

And so the Autism community, already bruised and divided by bitter debates around vaccination, curism, and behavioural therapy braces itself for the inevitable hysteria about the “autism epidemic”, and the sensational media headlines which universally proclaim the increased prevalence of autism to be “bad news“.

I disagree. I think it could very good news indeed, and a sign that all the hard work of the autism awareness movement is finally bearing fruit:

The increase could be a result of increased awareness and understanding of autism amongst health and education services, and those who score/administer autism screening tests. As they embrace the notion that autism does not have to mean a non verbal child with intellectual limitations, hand flapping and no social interest, professionals become more aware of those children with a less “classic” presentation of autism.

Basically, instead of there being “more” autistic children per se, it may simply be that we (society, parents, educators, health providers) are getting better at recognising them. This is supported by the statistics in the CDC study which identify that autistic children with non-classic presentation and no intellectual disability make up the bulk of the increased diagnosis rates:

The increase could also be a result of Autism carrying less of a stigma than in previous times. More value may now be placed by parents in obtaining an autism diagnosis for their child. There may be an increased perception that diagnosis will lead to better support, and to educational and social advantages for the child.

If more families than previously are pursuing diagnosis, this in itself would inflate the figures. If we screen 1000 children, we will find more cases of ASD than if we screen 100 children.

In reality though, numbers are just numbers.

Behind every number is a child, and a family, including mine. What difference does this academic study make to her life, our lives, the lives of the whole autism community? The answer is: very little. It changes nothing.

For the autism community as a whole, our concerns remain exactly the same as they were before the CDC published it’s data. 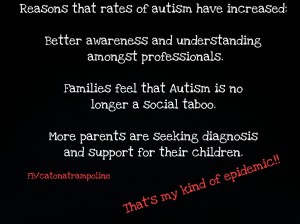 This is where the CDC prevalence rates really could prove to be bad news for autistic people. There is a danger that in April, the month where the Autism awareness and acceptance agenda should be at its strongest, the voice of the autism community will be drowned out by negative, scaremongering headlines about the “epidemic”.

There is a danger that the reaction to the statistics by society and the media may divert funding and attention from the issues that this community knows to be crucially important:

At the end of the day, the figures tell us only one thing with any certainty: Autistic children exist.

We know that these children will grow into autistic adults, each with an individual set of strengths, needs and talents. For their sake, we need to limit the negative hysteria surrounding the CDC statistics, and instead use these numbers to open constructive debates that will lead to positive, constructive changes for the futures of all autistic people. 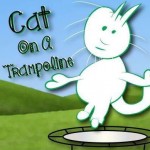 Liz lives and works in Birmingham UK. She has a 5 year old autistic daughter, an 18 month old NT son, a husband, and a variety of furry pets.

When not clearing up after any (or all) of the above she can be found writing at the following places. Follow Lix on her blog  or on Facebook. 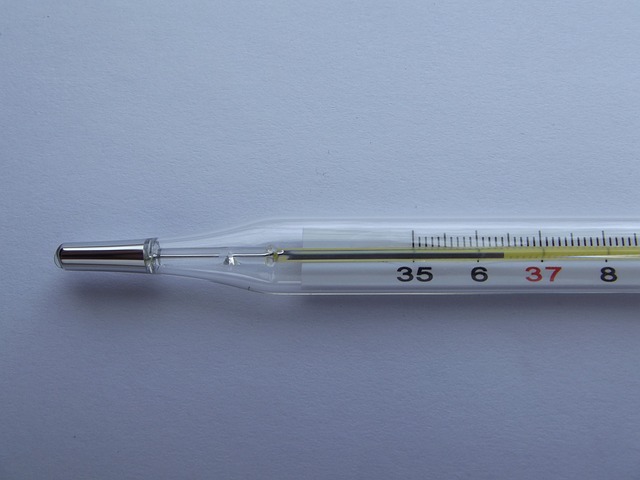 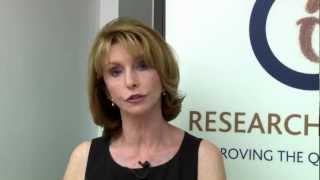 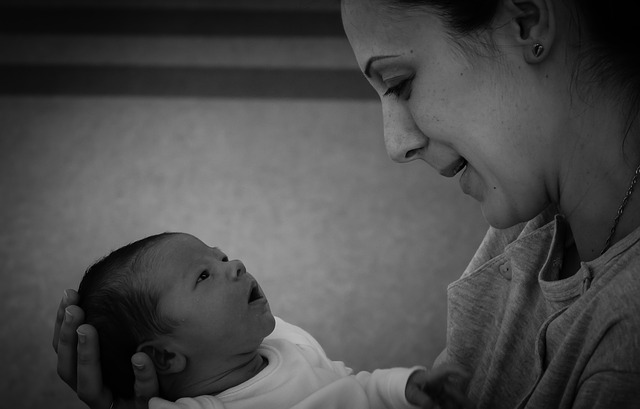 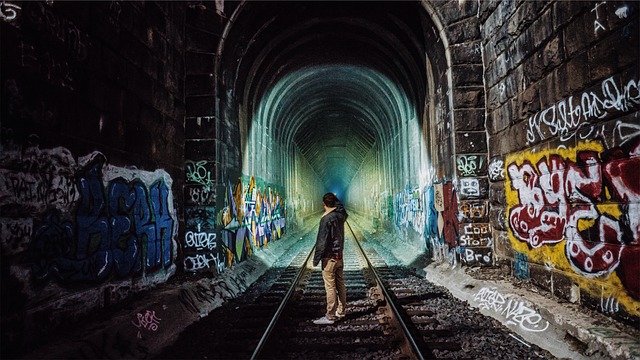