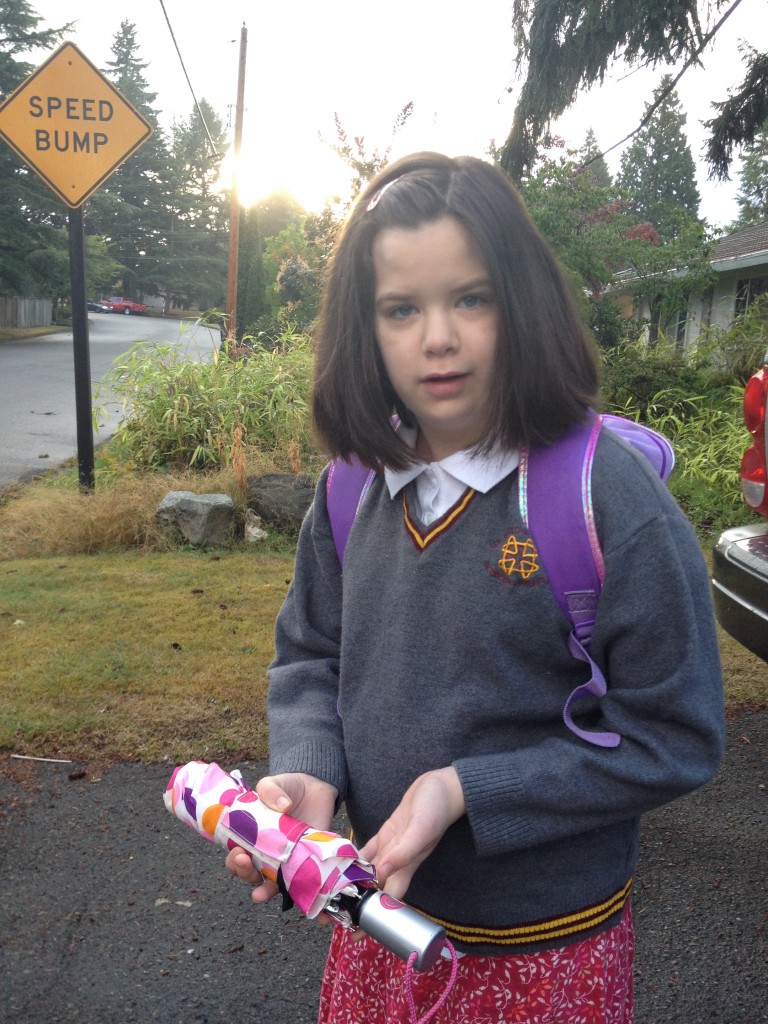 The second time I visited the school, my husband came along, and I was able to actually see the school for what it was – a place that could be very good for Maura. The principal explained how while they did cover academics, the primary goals were life skills, preparing these children for adulthood. Including potty training.

I allowed myself to get hopeful that this would be a good choice for Maura. And it was.

What we learned at our time at a the special school was that inclusion isn’t for a lot of kids. It might work for a few years, but as they age, they grow further away from their “regular” peers. The gap widens. At the special school, Maura’s peers were actually her peers. She had a group of kids around her age, who were at her level. She got to really be part of the community in the school. Everyone knew everyone, and everyone was understood.

Maura still didn’t learn to write. But that was okay. She learned how to use the toilet thanks to that school, and let me tell you, toileting trumps writing ANY day. She went to school functions, and discos, and outings, and birthday parties for classmates.

I also got to see how children like Maura could grow up. Her school was for ages 7-18. I was amazed at how much the older kids could do, and that gave me hope that Maura would be able to get to that level someday. I watched the teens tease their friends like any other set of friends, or comfort one when they got nervous. In the walls of the school, they were the normal ones.

Maura’s time in the special school dispelled some of the myths of “Inclusion is always better” for me.

One was the idea that inclusion will help a special ed student mature more, because they will have their “normal” peers to model proper behaviors. Yet as it turned out, Maura was one of the more immature students in her class. She was also the last to be toilet trained. I think it was because the special school’s goals were based around preparing these children for life after school, instead of meeting specific IEP goals or academics.

Another was the idea of special therapy times. Maura had speech several days a week when she was in the inclusion program. The special school didn’t have a speech therapist in house. Instead, the entire class program was built around communication skills. Her speech grew during her time there despite the fact that we didn’t do a single session of speech therapy the entire time there.

Mostly though, there’s this idea that sending your child to a special school means hiding them from society. This was the furthest from the truth. The students went on tons of outings, to learn how to use public transport, how to shop, etc. They were known. And the school was known as well. When people asked us what school our kids went to, we’d mention Maura’s and the reaction was immediately “Oh! That is SUCH a good place!”

So when we moved back to the states, we didn’t want to throw Maura back into inclusion. We had realized that for her, it wasn’t ideal. We found a school district with a life skills program. Maura is in a special classroom in a regular school, where she spends most of her day. She is thriving. Which at the end of the day, is all we want as parents.

I think, having been through all the school options for a special ed student, that the biggest problems we have in the U.S. when it comes to our students with special needs is that there aren’t options in most cases. Originally, the problem was that students with some needs were thrown into special classes or schools, and left to rot. But now, we have the LRE (least restrictive environment), where you’re kind of forced to try inclusion because it’s the only option. And when it’s the only option, it’s not really an option. In Ireland, we had the right to inclusion, but it was an option. The idea of the LRE had to be explained to them. Seriously. The social worker reading Maura’s forms had to ask what LRE stood for.

I am thankful that we found a place for Maura where we could have the option that was right for her. No amount of inclusion in the world will make Maura normal. But at least in her special class, she has the chance to learn the things she needs to learn.

So my advice for those of you who have a child with moderate disabilities, who aren’t sure about inclusion for your child and are offered a life skills program, or special classroom is this – give it a chance. Take an honest look at the program, and what your child truly needs. Special schools and classrooms don’t equate to giving up on your child. It might be actually giving your child the best chance at meeting their own full potential. It could be the best choice. It was for us.

Reprinted with permission from Herding Cats by Phoebe Holmes

Phoebe Holmes is a writer living in the PNW with her husband, three teens, one special needs tween, and two ridiculous dogs.  She writes about all of them and more at her blog, Herding Cats, and can also be found on Twitter @phoebz4  and Facebook (https://www.facebook.com/herdingcatsblog )

Everyone experiences anxiety at one time or another, END_OF_DOCUMENT_TOKEN_TO_BE_REPLACED

Autism is a complex disorder with many facets. END_OF_DOCUMENT_TOKEN_TO_BE_REPLACED

A Sydney couple Dennys Martinez and his wife END_OF_DOCUMENT_TOKEN_TO_BE_REPLACED