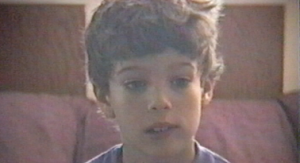 What was life like as a family when Robert was growing up?

It was very busy. He was the middle child of 3, with an older brother and younger sister. His brother is 24 months older, and sister is 3 years younger. It was very hard to take all three kids out at the same time when they were very little because this was around when Robert’ behaviours were the most challenging, since he had a very difficult time communicating and was extremely active, with no sense of danger. In fact, if we were out for a walk or going somewhere busy, I often had to put Robert on something similar to a leash!

In many ways though, we did the same things as many families like going to parks on the weekend. During the week, for many years, I felt like I always had to drive or pick someone up from somewhere or something. My children all did best with routine (like many children) but Robert did require extra supervision. In the summer, we often rented a house on one of the local islands near here, and all of my kids enjoyed that.

Did you get help and support as a family?

We had help from relatives, especially my parents-in-law. They helped drive Robert to pre-school or to appointments, or looked after my other kids while my husband and I took Robert to appointments. My sister and my aunt, and other family members were always very welcoming to Robert.  We did not qualify for financial support from the government, but did receive a bit of money for “respite” support, which covered the cost of a few hours of care per week, so we could spend time with our other children.

When he was a young child, we also had a child care worker who took him places to practice socializing, usually once a week, and in his early teens he participated in a special youth group on Saturdays, which focussed on life skills such as taking transit or crossing streets safely.

Did you know much about autism previous to the diagnosis?

No and neither did my doctor. Back then, “autistic disorder” as it was called, was rare and usually reserved for what we would now describe as moderate-to-severe cases of autism.  He was such as nice looking boy that when I first expressed my concerns about his development, people told me that there was no way that anything was wrong because he was so cute, and not to worry because many boys talked late and were hyperactive (this was when he was 5 years old even!)  Internet was not widely available then and I had to depend on library books, and very few books were written about the subject and mostly talked about very severe cases, with dismal outlooks!  I remember when they first mentioned autism after his assessment I was like “huh? Aren’t those the kids who hug vacuum cleaners?”

I had no idea of the “spectrum” description. I also have no idea where that vacuum-cleaner bit came from, but it was pretty common because I remember numerous people asking questions like “Is he afraid of vacuum cleaners?” (in fact he was),”does he like vacuum cleaners a lot?” and I swear to God even my family doctor, after hearing the diagnosis said “But he doesn’t hug vacuum cleaners does he?”  It is actually pretty funny in hindsight, but it shows how little people knew about autism and how rare it was.

In the film we find out that Robert’s love of pinball began at the age of five. Where did he go to play pinball? How many times a week?

The first time he played pinball was about the age of five, when my husband took him to a hamburger café near our house. There was a pinball machine there and Robert started to play with it. We went there maybe twice a month because we could actually sit and eat while Robert kept busy with the pinball close by. Most of the time in restaurants he was too active and loud to eat out. When we took him out to places like bowling alleys, he was always more interested in pinball machines there than anything else. When he was young I estimate he would play pinball a couple of times a month, but mostly by accident, we didn’t take him to play pinball on purpose. We noticed that in most places he was very sensitive to noise and would often cover his ears, but with pinball seemed to love the sounds it made. 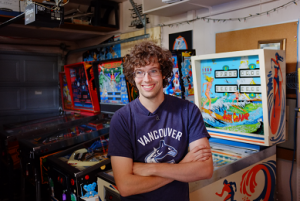 Did Robert and his brother go and play pinball together?  Did they share any common interests?

My older son likes pinball somewhat but not nearly as much as Robert does. He finds the sounds annoying and too loud.  They both like video games and when they were younger would often play Nintendo together, but that stopped when they were about 16 and 14. I would like to see them socialize together a bit more but they are quite different in personalities.

My oldest son is very intelligent and quiet, preferring reading or making computer games, and is selective about things, whereas Robert is very extroverted despite his autism (the most extroverted in the family!) and the older he gets the less selective he is, such as trying exotic foods.  However they share common interests too. Hopefully they will start to hang out with each other more as they get older.  Robert’s sister likes pinball too and occasionally participates in local tournaments with Robert, but she is busy with many things and doesn’t have the same level of passion for pinball, but as I said does enjoy it.

Whose idea was it to make a film about Robert?

He has been in several news stories on TV and in print, and a TV channel (Discovery Channel) did a series of 7, one-half hour episodes about savants, and Robert was the subject of one of the episodes (the series is called Ingenious Minds). Through one of the stories, the film company Salazar began to notice more stories about Robert, and found out that one of their friends knew Robert through pinball, so they thought it would make an interesting story.  At the time they were looking for interesting ideas to make a personal project, so they just happened to hear about Robert and pinball at about that time, and we were fortunate!

How were you approached to make the film?

The mutual friend (Brennan) gave Jeff and Nathan (the filmmakers) our contact information and one day I received a call from Jeff saying he and his film partner were interested in possibly making a film about pinball starring Robert. We arranged for them to come over to our house and they met Robert and explained to us about their company and their general vision, and that they would need us to be active participants if we decided to go ahead with it. We liked them right away. I remember they said they would be seeking some funding to make the movie, and then we didn’t hear from them for awhile.  I sort of figured maybe they decided to do a different project, or maybe the funding to start the film didn’t materialise, but one day they contacted us again with a kind of “Hey, remember us?” type of email and the rest all fell into place.  I don’t think at the initial stage they realized what they were getting into. There are so many different facets to pinball! We have thoroughly enjoyed being part of the process and seeing all the cool stuff they are doing to make the film.

Coming up next is my interview with Robert and the film Director.

Everyone experiences anxiety at one time or another, END_OF_DOCUMENT_TOKEN_TO_BE_REPLACED

Autism is a complex disorder with many facets. END_OF_DOCUMENT_TOKEN_TO_BE_REPLACED

In a series of revealing and sometimes chilling END_OF_DOCUMENT_TOKEN_TO_BE_REPLACED