Home
Life On The Spectrum
Education
Could Robot Therapists be the Wave of the Future?
Prev Article Next Article 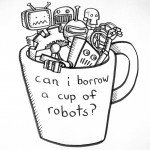 Dr. Joshua Diehl of the University of Notre Dame conducted a study to explore this question.  His study included 19 children – 17 boys and 2 girls, ages 6 to 13, with varying degrees of social abilities.  All of the children received 12 one-hour sessions of Applied Behavioral Analysis therapy with a human therapist.  A robot therapist, which was controlled by another human therapist in a nearby room, joined in for six of the 12 sessions.  Parents and therapists filled out standardized questionnaires to assess the children’s gains in social skills over the course of the study.  They found that 17 of the 19 children showed improvement in social skills, and that these improvements were more pronounced during the sessions that included the robot.  Parents also reported that these social gains were generalized to other environments, including home and school.

Another robot therapist is being beta-tested at Topcliffe Primary School in the United Kingdom.  ASK (Autism Solutions for Kids) Nao is a robot created by Aldebaran Robotics that is programmed with various applications to help children with autism learn social skills.  Nao is programmed to model appropriate social speech, facial expressions, and gestures, and to respond to the children interactively.  Teachers at the school report that children are motivated to interact with Nao, and that they have seen much improvement in the children’s social skills since the robot was introduced into the classroom.

Can robots teach social skills to children with autism? Aldebaran Robotics has produced other robot models, including Kaspar, Hanson Robokind, and Bandit, all of which have shown promising results.  The company is also working on a user-friendly interface to help teachers and therapists plan, monitor, and analyze Nao interactions with children to determine their usefulness in teaching social skills, along with several apps designed to help children learn about emotions, body language, and other social skills. Nao, their most advanced robot-therapist, retails for US $16,000, making the cost prohibitive for many families and schools.  Other companies, like Movia Robotics in Connecticut, are working to produce less expensive models that will be accessible to more children.There have been other technology-based tools to help children with autism learn social skills, including computer software and I-Pad apps, but none of these can imitate the facial expressions and gestures of a real human being quite as well as a robot.  While the cost of these robots is quite high, the research is promising, and it is likely that companies like Aldebaran and Movia will continue to research ways to make this technology available to more of the children who can benefit from their products