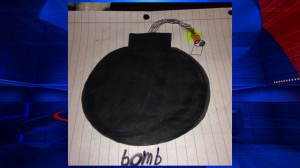 Thirteen year old Rhett Parham, was suspended indefinitely from his school in Greenville, S.C. for bringing a drawing of a bomb to school. The picture was a cartoon of  his favorite video game, Bomberman 64, old Nintendo game. A older student complained that Rhett has said he had a bomb.  Officials stepped in and suspended Rhett indefinitely.

His mother, Amy Parham claims her son who is autistic, was just sharing his artwork and it was a misunderstanding. She said on Tuesday:

“I’m angry. I’m upset and I’m incredulous, honestly, that a child could come in and bring a drawing and that’s somehow perceived as a threat — especially someone with special needs who really doesn’t filter information the same way that typical children do.”

A school meeting on Wednesday the original suspension was lifted by the Greenville County School District to determine if the event was a result of his learning disability and the suspension was reversed. Parham said.

“They did not suspend Rhett and they did not recommend expulsion.  They realized that his disability was the reason that he made statements and drew the picture, and that he had no malicious intent what so ever.”

A spokesman Oby Lyles released this statement on behalf of the district, saying:

“The school administration responded appropriately when threatening comments were made, investigated it fully, and acted in accord with applicable laws, policies and procedures to bring this incident to its proper closure.”