Home
General Interest
Technology
Peter the Robot – “WOULD YOU LIKE TO PLAY AGAIN?”
Prev Article Next Article 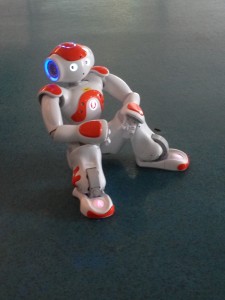 Back in the spring, the Bond’s Centre for Autism Spectrum Disorders (CASD)  secured a 58 centimetre humanoid robot, developed by Brainary Interactive, for the research. CASD director Professor Vicki Bitsika said,

According to “There is an increasing interest in using technology to help people on the autism spectrum, but one of our greatest concerns in the field, especially if you look at some examples of how iPads are used, is that we seem to be handing children a piece of technology to interact with but are not taking the second step, where we use that to help integrate them into the social world.

“We want the robot to become that bridge.”

The robot has many names depending on your country – in France, he is Dany, In Australia he is call Ulysses and in the USA he has a few name but the story below is about Peter.

“WOULD YOU LIKE TO PLAY AGAIN?” asks the diminutive robot named Peter. Several of the 3- and 4-year-olds in the pre-K/kindergarten class are excited about the prospect. “Yes, robot!” “Let’s do it again!” “I love this robot!” they call out. “Can you show me a dog?” asks Peter.