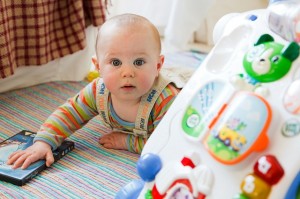 A large scale study published on August 13 in the Annals of Neurology , demonstrated that mothers with low levels of the chemical Thyroxine in their system during pregnancy were almost four times more likely to have children with Autism or an ASD diagnosis.

Thyroid hormone T4 is responsible for regulating the metabolism in the body. A lack of this hormone, or Hypothyroidism (underactive Thyroid) is caused by a lack of Iodine in the diet, and can cause metabolism to reduce dramatically causing weight gain, lethargy and circulatory problems.

T4 deficiency is more pronounced during pregnancy, when the body makes higher demands on diet. Researchers from the Houston Methodist Neurological Institute and Erasmus Medical Centre tested 4,000 Dutch mothers and their children. Previous smaller scale research in this field has tenuously hinted at a link.

The research demonstrated that the lower the levels of the hormone T4 in the mother’s system, the more pronounced the symptoms of Autism were likely to be in the child.

Lead author Dr. Gustavo Román, a Neurologist and Neuroepidemiologist who directs the Nantz National Alzheimer Center said in a press release: “It is increasingly apparent to us that autism is caused by environmental factors in most cases, not by genetics . That gives me hope that prevention is possible.If you are planning to become pregnant, have your doctor measure urine iodine and thyroid function beforehand. If you have just become pregnant, have your doctor measure urine iodine, thyroid function, and begin using prenatal vitamins, making sure iodine is present.”

It is thought according to research conducted by the World Health Association that globally up to one in seven of us could be T4 deficient. Levels are lower in USA because of the introduction of Iodised table salt in the 1920’s.

One of the main authorities on hypothyroidism and effects during pregnancy is a 1988 study conducted by The American college of Obstetricians and Gynecologists which demonstrated that difficult pregnancies were related to low levels of Thyroxine in the bloodstream.

On August 14 Autism Daily Newscast reported how drug induced labours could increase the risk of Autism diagnosis in children.