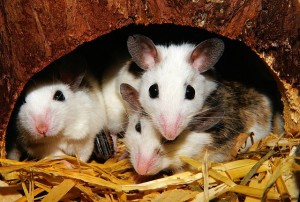 A darting mouse may hold an important clue in the development of Attention Deficit Hyperactivity Disorder (ADHD), autism and bipolar disorder, according to a study by a Vanderbilt University-led research team recently published in the Proceedings of the National Academy of Sciences

The transgenic mouse, into which was inserted a rare human genetic variation in the dopamine transporter (DAT), could lead to improvements in the diagnosis and treatment of these all-too-common brain disorders, said Randy Blakely, Ph.D., the report’s senior author.

The mutation, which has been found in people with ADHD, autism and bipolar disorder, affects the function of DAT, a protein that regulates the brain’s supply of the neurotransmitter by removing excess dopamine from the synapse, or the space between nerve cells.

The DAT mutation causes the transporter to become “leaky” and spew out dopamine like “a vacuum cleaner in reverse,” said Blakely, Allan D. Bass Professor of Pharmacology.

While mice with leaky DAT proteins have too much dopamine hanging around their synapses, surprisingly they aren’t particularly hyperactive, possibly because DAT can still remove some of the dopamine.

But the mice exhibit an unusual “darting behavior.” While their wild-type littermates are docile and quite unresponsive when researchers pick them up, those with the mutation “take off.”

“Early on,” Blakely said, “we could tell which ones carried the mutation by observing this response.” Heightened anxiety does not appear to be the cause.

Blakely and his colleagues wonder whether this behavior is a form of “impulsivity.” Rather than acting on their memories of being picked up a lot, the mice are opting for an inappropriate escape strategy.

Normal mice also stand up a lot to explore their cage. This “rearing” behavior is exacerbated by stimulant drugs. But not in these mice.

“We wonder whether this may be a sign that their behavior is driven less by searching for clues to appropriate behavior versus acting on innate impulses,” Blakely said.

Other, better tests of impulsivity that evaluate premature decision-making can be applied in rodents and humans. “These tests are next on our docket,” he said.

The actions of amphetamine and methylphenidate (Ritalin) are also affected by the mutation. In normal animals and people without ADHD, the stimulants flood the synapse with dopamine, eliciting hyperactivity.

But when given to the mutant animals, the drug demonstrates a “blunted” effect on both dopamine release and on locomotor activation compared to normal animals.

Blakely wonders whether stimulants like Adderall and Ritalin quell hyperactive and impulsive behaviors in some children with ADHD by reducing inappropriate dopamine leak. “These mice may give us much better clues as to how these drugs are acting,” he said.

To that end, Blakely recently received a five-year, $2-million grant from the National Institutes of Health (NIH grant number MH109054) to pursue explorations of these mice.

“Dopamine has classically been implicated in reward and the ability to detect novelty and to respond to pleasure and to engage in effective social interactions,” he continued. The darting mice thus might shed light on a much broader spectrum of behaviors.

Blakely credited Aurelio Galli, Ph.D., professor of Molecular Physiology and Biophysics, with whom he collaborated to identify the leaky properties of the mutant DAT protein.

Colleagues in the Vanderbilt Transgenic Mouse/ESC Shared Resource and Vollum Institute at Oregon Health and Science University in Portland made and helped study the transgenic mouse model, and first author Marc Mergy, Ph.D., received his doctoral degree in the Vanderbilt Neuroscience Training Program.

The study was supported in part by the Vanderbilt Silvio O. Conte Center for Neuroscience Research, which Blakely directs, and NIH grants MH090738, DA004523 and MH086530.