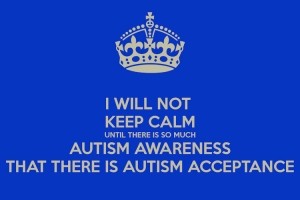 April is Autism Awareness Month, and April 2nd is World Autism Awareness Day, so today in particular, we’re going to address reality about autism. Namely, the fact that awareness isn’t reality, and more to the point does little to help those who are actually autistic.

To be aware is great, but to accept the autistic is far more important not only to them, but to others. In real terms, awareness is extremely limited in the mind of the observer. To be aware of something implies a lack of detailed knowledge of the subject.

There are many things in life and our experiences we are aware of, but only a fraction of them gain acceptance in our minds.

Fast forward 48 years and I meet a brilliant young man with Asperger Syndrome. At first, he doesn’t tell me that he has AS. He just seems, well, a little weird. It took him over a year before he confided in me that he is an Aspergian. All along I was aware of something odd, but it didn’t bother me. However, once he informed me, it was easy to accept his condition and to discover what it means to him and others. Together, we formed Autism Citizen, and today he’s a trusted best friend.

As time progressed with Autism Citizen, we heard the protestations of throngs of autistic individuals who believe that simple awareness isn’t sufficient. They don’t want people to simply know they exist, but to be accepted as an equal. In researching their perspective, it became evident that most autism organizations work for awareness, and some really big ones deal only in research, with little if anything given back to the autistic.

This is, candidly, a crime. One organization, I call ‘big blue’, raises tens of millions of dollars and gives back nothing, really, to the communities where they raise money. They promote awareness through events and public relations campaigns, mostly for fundraising, and less to help people. So awareness means nothing to those with autism and everything to marketers and promoters. Keep in mind that a donor who’s made “aware” is anything but, because he or she is unaware of the use of that donation. They’re told to believe the money goes to help the autistic, but it never does. Rather, it usually pays high salaries; high operating costs and to fund pet projects to further enhance the organization’s reputation and support future fundraising.

The key to giving those on the autism spectrum peace of mind and comfort is acceptance, which the community is screaming for, though only a few organizations, such as Autism Citizen are listening.

To you, a broader definition of autism, and welcoming people with autism into your life as friends, colleagues and peers.

To those with autism, it means being a part of the broader community with reduced fear of prejudice or bullying, and the chance to have friends, and co-exist with others. It means they’ll be treated as normal and that their autism doesn’t set them apart.

Oh, what a wonderful feeling it is to be accepted by others. 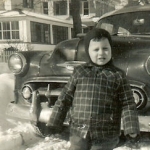 About the Executive Director

Dr. Robert Angelone is an economist and co-founder of Autism Citizen, Inc. He is dedicated to the cause of autism acceptance and protection of the rights of those with ASD. He believes education is the key to improving life for those on the spectrum.

Autism Citizen, Inc. is a trading name for Reform It Now, Inc., its parent company (a 501(c)(3) charity).  It is dedicated to awareness of the civil rights, liberties and protections of law that all citizens enjoy, including those who are on the Autism Spectrum.

Editor’s Note: Earlier today we received the following reply to our tweet… and so glad we did: https://twitter.com/AutismCitizen/status/583538967297073152
Reprinted with permission. The original post can be found here. Opinions expressed by Autism Daily Newscast Contributors are their own.

Everyone experiences anxiety at one time or another, END_OF_DOCUMENT_TOKEN_TO_BE_REPLACED

Autism is a complex disorder with many facets. END_OF_DOCUMENT_TOKEN_TO_BE_REPLACED

In a series of revealing and sometimes chilling END_OF_DOCUMENT_TOKEN_TO_BE_REPLACED