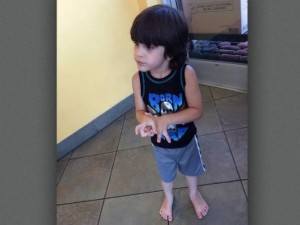 BURLESON, Texas — A young boy with autism died shortly after he was found inside a hot car in Burleson, Texas, on a weather where a nearby town had a 97-degree afternoon on Sunday.

Five-year-old Zachary Elshaarawy wandered off their family home and was reported missing for about 15 minutes when he was found by local police inside the backseat of a hot car that was left unlocked by its owner.

According to his grandmother, the family searched all over their house to find Zachary, and so did the local police before they eventually searched areas nearby and later on found him.

Before Zachary went missing, his dad was busy building a swing set for his beloved young boy in the family backyard.

The young boy’s father, Darek, was left devastated by the tragic incident. Zachary was his only child.

In an interview with WFAA-TV, he told:

“I don’t know how I’m going to live. He was happy to go to school [tomorrow]. He knew he was going to go.”

Deaths in children left in hot cars appear to have increased exponentially this year, where 14 incidents has so far been tallied year-to-date. A total of 31 deaths from the same incidents have been recorded last year.